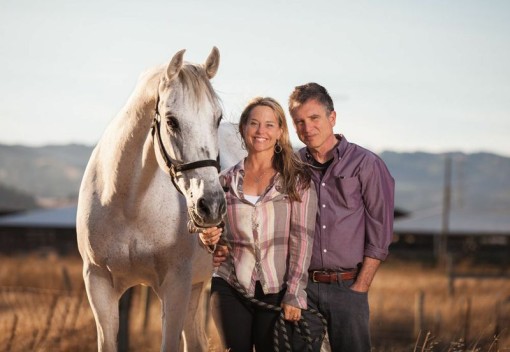 Jennifer Grais is a singer-songwriter who recorded several albums in Los Angeles and Nashville and toured as Jackson Browne’s background singer.  When she met Michael and they moved to the rural area of Topanga Canyon, CA, her childhood passion for horses was rekindled.  She completed a year-long program of study with Linda Kohanov, best-selling author of “The Tao of Equus”, and “Riding Between the Worlds,”  and began exploring a deeper relationship with horses. In December 2006, she was captivated by footage of a horse rescue that took place during a flood in the Netherlands at the hands of women riders.  The drama of the rescue inspired the novel, “Christa’s Luck,” a young adult novel co-authored by Michael Grais.  Research for the novel exposed Jennifer to the unfolding drama of the wild mustangs in the western United States and became the primary plot of the book.   Read more about Jennifer and the inspirations behind Christa’s Luck.

Michael Grais has written and produced movies of domestic and international acclaim including Death Hunt, Poltergeist, Poltergeist II, Marked for Death and Cool World and more.
Michael has also contributed to the book Why We Write and has taught filmmaking at University of New Mexico and in various workshops abroad. After attending New York University’s Film School and Emerson College, he earned his MFA in Creative Writing from the University of Oregon. Read more about Michael Grais.

Michael and Jennifer currently live in Northern California with their horse, Solo and two cats Francesca and Finnegan.

You can order a signed copy of Christa’s Luck directly from the authors! Just click the BUY NOW button for PayPal and purchase your signed copy today.